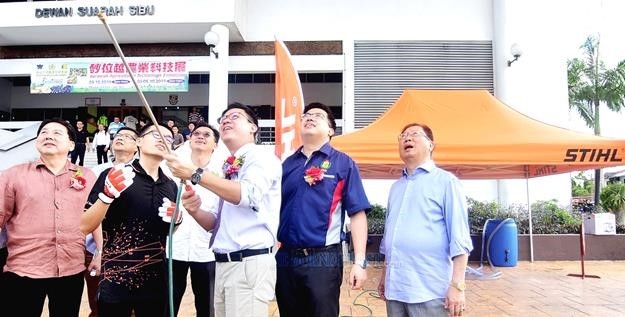 SIBU: Changing the mentality of the farming community to adopt better farming practices is foremost in the effort to modernise the agriculture sector.

In pointing this out, Sibu MP Oscar Ling stresses that smart farming entails raising greater awareness and benefits of new farming technology among the farmers.

“And that’s the reason we are here today to have this Sarawak Agriculture Technology Exhibition. This is the opportunity provided by various groups, especially our Sibu Chinese Chamber of Commerce and Industry Youth Committee, to put efforts in one platform to introduce to our local farmers new technologies and trends in the current farming world.

“We are also obliged to help more youths to venture into the agriculture sector. This is particularly challenging due to the fact that the average Malaysian farmer is 50 years old,” he said yesterday at the Sarawak Agriculture Technology Exhibition 2019, hosted by the Sibu Chinese Chamber of Commerce and Industry Youth Entrepreneur Committee here.

He said lured or attracted by the promises of employment and modern lifestyles, many rural youths had relocated to urban centres and shied away from labour intensive farming.

“It is pertinent to attract and retain youths within the farming industry, particularly those who are interested in technology, by providing suitable employment opportunities that involve modern technology in farming.

“(With) suggestions like creating modern high-tech farms, establishing permanent food parks (and) building learning institutions for modern farming, with youth involvement, it would be easier to incorporate new farming technology and change the farming culture in our country,” he pointed out.

According to the MP, agriculture is the fourth largest contributor to the national gross domestic product (GDP).

“From the 1960s to the 1980s, the agricultural sector contributed about 20 per cent of our GDP; clearly, we can see the percentage has been dropping throughout the years from 20 per cent GDP to now 8.2 per cent GDP, but the actual amount is still increasing, just because it has become less significant in our economy.

“Even though it has shrunk in percentage in (relation to) our GDP, the numbers are still going strong, and keep increasing and creating more jobs; it has the potential on its own to go vibrant again in time to come. In the past, we were over reliant on two big commercial crops – oil palm and rubber,” he added.

Meanwhile the three-day exhibition, which concluded yesterday, had 37 booths set up at Sibu Civic Centre.