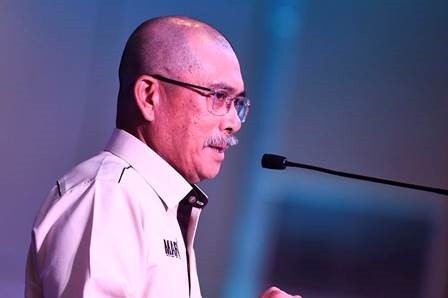 PUTRAJAYA, March 11 - Ensuring adequate food supply during the Covid-19 pandemic, especially during the movement control order (MCO) since March 18 last year, has been a big challenge for the Agriculture and Food Industries Ministry (Mafi) but it was successfully implemented.

Its Minister, Datuk Seri Ronald Kiandee said the implementation of the MCO had disrupted the smooth running of the food chain, including production, distribution and retailing of agricultural products, and the food industry.

However, he said Mafi, with the cooperation of all parties responsible, had ensured that the situation was always under control and that the food supply was adequate and stable because the agriculture sector and food industry were necessary services.

“Mafi takes various approaches, especially to manage food shortages and dumping issues, including the implementation of the Controlled Fresh Market in 196 selected locations and the implementation of online marketing (e-commerce), which is a strategic partnership with Shopee, Lazada, MyGrocer and so on,” he said in an interview held in conjunction with the first-year anniversary of Malaysia Prihatin for Mafi, here.

According to him, the FSCC is the first Cabinet committee formed under the Perikatan Nasional government.

“Soil profile information for a total of 350,000 hectares of padi parcels will facilitate the preparation of new subsidised fertiliser formulations as well as enable monitoring of the entire padi and rice value chain to be carried out online,” he said.

He said the ministry had also improved the certified rice seed distribution process with new initiatives, including appointing the National Farmers Organisation (Nafas) as the sole wholesaler of legitimate rice seed initiative programme and also setting the ceiling price of the seeds at RM35 per bag.

Ronald said the initiative would prevent the manipulation of certified padi seeds and prices in the field through uncontrolled purchases by various parties at the factory door as well as avoid the dominance of any particular supplier in the seed market in particular, and the padi and rice sector in general.

Ronald said the initiative benefitted almost 320,000 farmers in Peninsular Malaysia, while Sabah and Sarawak were also not forgotten in the agricultural sector of the states involved such as the implementation of the Kota Belud Integrated Agricultural Development Area (IADA) in Sabah.

“For Kota Belud IADA, we are intensifying the implementation of infrastructure projects. The government has allocated RM360 million to create Kota Belud IADA. Some RM150 million has been implemented and the balance will be aggressively implemented in the near future to ensure that padi fields in Kota Belud are able have padi planted twice a year.

“Similarly, for Sarawak IADA. Meanwhile, IADA padi and also IADA fruit in Sarawak will be continued. Although the ministry is focusing on the rice industry in the peninsula, potential padi fields through IADA that have been established in Sabah and Sarawak will continue to be empowered by the ministry,” he said.

Ronald said Smart SBB was a smart public-private partnership between the government and leading companies to develop a padi cultivation area of 150,000 hectares per season for the first phase in stages in the peninsula.

“Smart SBB will help restructure industry players more systematically, especially in minimising and eliminating the involvement of middlemen who are seen to be creating a gap between farmers and rice production and also marketing. It will change the landscape of the country’s padi and rice industry and achieve the government’s goal of ensuring food security in the country all the time,” he said.

Apart from that, he said a total of 42,000 fishermen enjoyed the protection of the Social Security Organisation under the implementation of the Self -Employment Social Security Scheme for Fishermen in collaboration with the Human Resources Ministry.

In an effort to help reduce the cost of living and ensure food security especially for the B40 group in urban and suburban areas, Ronald said Mafi had implemented the Community Garden programme (Kebuniti) which had been well-received by the people.

“The government has allocated more than RM30 million to implement this programme. In 2020, the Kebuniti programme benefitted more than 13,524 individuals and 632 communities with this initiative continued this year under the Kebuniti 2.0 Programme,” he added.

The Kebuniti programme, with the guidance of the Department of Agriculture, helps households reduce the cost of living through their own food production, involving short-term crops especially vegetables.