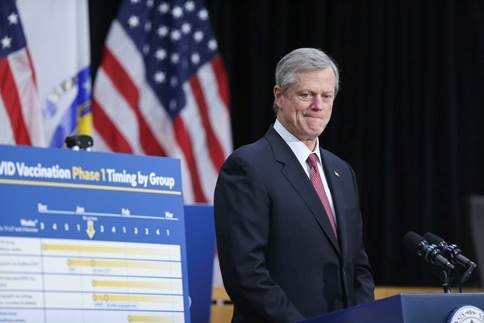 The governor on Thursday said a restriction adopted in November requiring restaurants, bars, and many other businesses to close at 9:30 p.m. will expire on Monday, as well as an advisory that residents remain at home between 10 at night and 5 the following morning.

However, Baker extended other measures imposed last year when a new surge of infections hit Massachusetts, requiring many businesses to maintain 25 percent capacity limits through Feb. 8. Restrictions on residents gathering in numbers will also remain in place, at 10 people indoors and 25 people outdoors, and include private homes as well as public spaces. Lieutenant Governor Karyn Polito added that the announcement did not affect businesses currently required to remain closed, such as indoor performance venues.

Also on Thursday, the state reported 4,821 new COVID cases and 75 additional deaths attributed to the coronavirus. That drove the total number of cases since the start of the pandemic to 462,910, and fatalities to 13,622, according to the Department of Public Health.

The restaurant industry reacted to Baker’s moves with a mixture of relief and some frustration. For many, ending the 9:30 p.m. closure is both an immediate reprieve and a hopeful sign that further relaxation of the lockdown and additional help are coming soon. Indeed, also Thursday, the Biden administration announced a broad new front to combat the disease, including better coordination of vaccine distribution after a rocky start.

Matt Casey, director of operations at Back Bay Social, Lucky’s, and Sonsie, said the dropping of the early closure and stay-at-home advisory will give people in the restaurant industry an emotional boost.

“We’re very excited that the curfew may be being lifted. Any additional revenue is a huge help. Any step in a positive direction towards going back to normal will lift the spirits of all of us in the restaurant industry,” he said.

Others expressed frustration at having to continue to abide by the capacity limits, saying they have far more impact on their business.

“Personally, the 9:30 p.m. curfew has had no effect on my business. I’ve never had a reservation past 8 o’clock,” said Jen Royle, who runs the restaurant Table in the North End. “At 25 percent, my capacity has been 12 people for the past two months, so I haven’t even bothered to open. . . . It’s terrible. No curfew lift can change that.”

Beyond restaurants and bars, businesses affected by the 9:30 closure include liquor stores and marijuana retailers, gyms, museums, and movie theaters, as well as “close contact personal services” such as hair and nail salons, Polito said.

Individual cities and towns can continue to enforce more stringent, local ordinances that could mean tighter restrictions on businesses.

Dr. Joshua Barocas, an assistant professor at the Boston University School of Medicine and an infectious diseases physician at Boston Medical Center, said allowing restaurants to stay open later probably won’t lead to a big rise in cases because eateries are unlikely to see a large number of patrons late at night.

But that doesn’t mean dining out is safe.

“Even though there’s a relaxation on some of the restrictions, it’s very important that people understand that indoor dining — especially in this period of time, with a highly transmissible variant and a population that is not necessarily vaccinated — is still . . . not one of the safest activities that you could do,” Barocas said.

“I’d much rather people spend time picking up takeout and having the food at their house, as opposed to in the restaurant,” he added.

Keeping people out of stores past 9:30 p.m. and at home overnight is of limited effectiveness because relatively few people would have been out at those times anyway, Barocas suggested.

“I think that it was a way that we could show we’re trying to limit activities, but at the end of the day, I’m not actually sure it did too much to limit those activities,” he said.

On Thursday, Baker promised that if the “very positive numbers” on COVID-19 cases continue to improve, he would revisit remaining restrictions.

“The decision to place any type of restriction on businesses is not one that any of us takes lightly and we appreciate that there’s been an exceptional impact on nearly every sector of our economy,” Baker said.

Also on Thursday, the governor expressed hope the state would receive larger quantities of the vaccine, estimating that the Biden administration’s plan would increase the number of doses by 25 percent. Massachusetts is currently receiving about 80,000 a week, and so far there have been 377,459 doses administered in the state, the governor said during a tour of the new mass vaccination site at Gillette Stadium.

Among the initiatives announced by President Biden later Thursday was an increase in the production of vaccines, ending the policy of holding back large numbers of doses, and encouraging states to expand access to front-line essential workers and people over age 65. The federal government also promised many more vaccination sites, from sports arenas to doctors’ offices, pharmacies, and retail stores.

Baker said Massachusetts can see only about a week ahead into its next shipment of vaccines, making it difficult to plan. Even so, the governor asserted that residents who qualify should be able to schedule a shot, and encouraged them to use the state’s vaccine website (mass.gov/covidvaccinemap).

Baker said he expects that over the next 10 to 14 days, states will have more clarity on the vaccine supply pipeline from the federal government and noted that two additional vaccines are wrapping up clinical trials.

Massachusetts has also distributed an additional $37.4 million in relief to 638 small businesses, the fourth round of such grants. Polito said that the new recipients include nearly 200 restaurants, and that almost half of all grant recipients in the new round are businesses owned by women, and another 200 are located in gateway cities serving “underserved markets.”