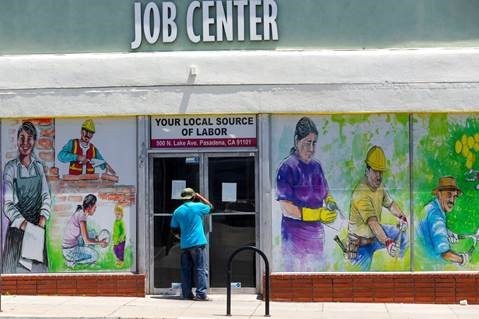 The seasonally adjusted figure for the week ended Jan 16 was worse than expected and just 26,000 less than the previous week’s downwardly revised level.

It was also still well above the single worst week of the 2008-2010 global financial crisis, during which Biden served as vice-president under Barack Obama.

Adding to the toll were 423,734 new filings made under a programme for self-employed people not normally eligible for benefits, while as of the week of Jan 2, the Labour Department said nearly 16 million people were receiving some form of aid from the government — a figure that’s expected to rise.

“Layoffs are ongoing at an elevated pace, reflecting the impact of containment measures,” Rubeela Farooqi of High Frequency Economics said in an analysis.

“Conditions are unlikely to improve until infections can be curbed, and the economy can reopen more completely.”

New jobless filings skyrocketed after states and cities restricted business across the US when Covid-19 broke out in March, and though they’ve come down from the millions reported each week as businesses shed employees en masse, they remain at very high levels.

The unemployment rate has seen a similar trajectory, shooting up to 14.7% in April but declining in subsequent months to its current 6.7%.

Biden has proposed a US$1.9 trillion spending measure aimed both at revitalising the economy and improving the rollout of Covid-19 vaccines, but Lydia Boussour of Oxford Economics warned the country is in for rough times to come.

“Fiscal stimulus prospects, along with broader vaccine diffusion, are pointing to a brightening labour market outlook but with the pandemic still raging, claims are poised to remain elevated in the near-term,” she said.