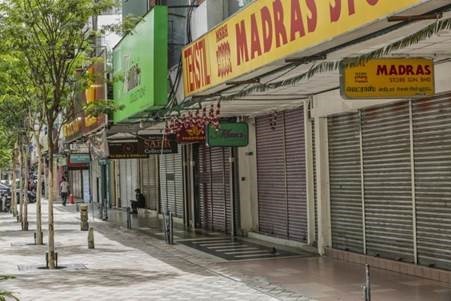 KUALA LUMPUR - Malaysian business owners remain dejected at the bleak prospect of an extended period of coronavirus restrictions despite the latest aid package announced by Prime Minister Muhyiddin Yassin, which experts say is not enough.

Restaurateur Alia Iman said although the wage subsidy has helped in the past, she believes that her days in business are numbered as most amenities are only allowed to operate from 6am to 8pm.

"Time is money, especially when restaurants like mine can only accommodate takeouts," said the 42-year-old.

"I'm no longer in the position to retain any of my workers anymore. I have used up my savings, which were supposed to be enough to cover all overhead costs for one year," she added.

The government is now extending its wage subsidy scheme, introduced last April to encourage worker retention. It offsets salaries of workers earning less than RM4000 (S$1,310) a month by RM600 for three months.

The scheme was expanded for business owners in the states and regions under the movement control order (MCO), when Tan Sri Muhyiddin on Monday (Jan 18) unveiled a RM15 billion aid package called Permai that also provides aid for individuals and has initiatives to curb Covid-19.

All Malaysian states, except Sarawak, have been placed under MCO 2.0 after Covid-19 cases averaged more than 2,500 a day in recent weeks.

Since the movement curbs were reimposed, there have been repeated calls for the government to consider extending the closing time for restaurants to 10pm from 8pm.

TV host Azwan Ali also took a swipe at his brother, Senior Minister for Economy Azmin Ali, for not "thinking" for the people.

#Sibodohkaudengarsini (Hey stupid listen here) became a top trending hashtag on Twitter this week as netizens who are unhappy about eateries closing too early during the MCO took to social media to vent their frustrations.

"I can't say Permai is not a good effort to help the people, but it's not a long-term solution," Malaysian Trade Union Congress deputy president Mohd Effendy Abdul Ghani told The Straits Times.

He suggested that instead of handouts, the government subsidises the cost of a sanitisation or disinfection programme for business operators so that they can stay open.

Referring to a RM50 million food basket programme being rolled out, he added: "People need more than just one-off handouts. How long can they survive with it anyway?"

Even with the wage subsidy in place, it was reported last year that 221 businesses wound up despite having received the assistance, and 2,713 small and medium-sized enterprises (SMEs) went out of business from March to Oct 30.

Some lauded the assistance package and called it "prudent", as it entails the reallocation of the RM250 billion stimulus package announced by the government under the first MCO announced in March last year, while others were bemused.

Economist Hafiz Nor Sham, who formerly served at the finance ministry, told ST: "I'm of the opinion that it doesn't make a dent. The measures are funded through reallocation of existing funds. That means there's no fresh money being injected by the government. In other words, it isn't properly a stimulus in the original sense of the word."

Although a slew of incentives in the aid package is also aimed at providing greater tax relief for Malaysians and to spur the local economy, Mr Hafiz said tax cuts would not be as effective as it usually would.

"When income streams get disrupted, tax cuts can be redundant for a lot of people," he added.

Defending the assistance package, Finance Minister Tengku Zafrul Aziz said the country will not be losing as much, compared with the RM2.4 billion lost daily during the first MCO from March to May last year, when almost all businesses were forced to close.

Malaysia's economy is estimated to lose as much as RM600 million daily due to MCO 2.0.

"This MCO is unlike the one in March last year as five essential sectors are still open; small and medium enterprises such as stalls and stores can still be opened," he told reporters on Tuesday.