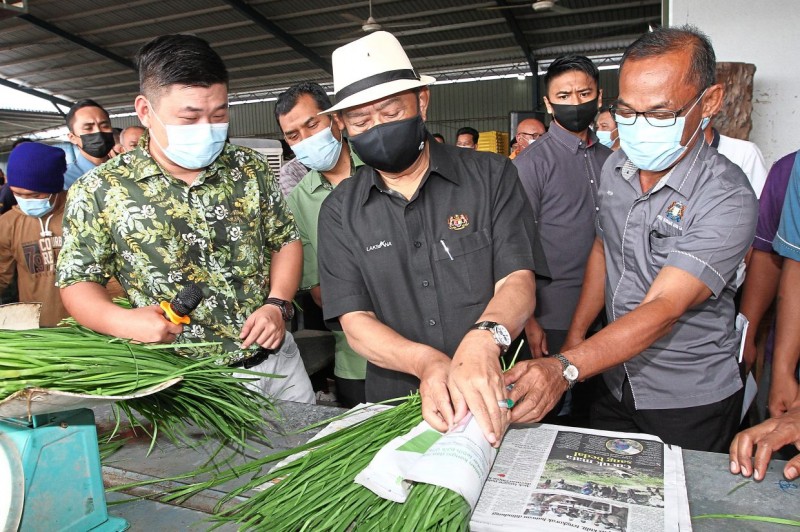 The farmers here welcomed Muhyiddin, who is Pagoh MP and Gambir assemblyman, to their farms and briefed him about the projects in the area, said Tan Chee Kiong, a secretariat member of the Batu 18 and 19 Sengkang 1 Grisek Cluster Farming project.

“This area is suitable to be developed as an agrotourism destination as we have a mushroom factory in Grisek, 202.34ha of padi fields and 242ha of leafy vegetable garden.

“The famous Gunung Ledang has a resort and this area has the potential to be developed as an agrotourism destination centre,” he said after the Prime Minister’s visit yesterday.

Tan pointed out that Muhyiddin advised the farmers to create a one-stop centre where visitors could gain experience doing farming work at the farms.

“Visitors can harvest the vegetables and cook them. We are also looking into making souvenirs such as shirts and hats as memorabilia for them,” he said.

He said the group had 30 members who planted 16 various types of vegetables and fruits, including papayas, bananas and guavas.

Tan added that farmers in the area were able to produce about 48,000 metric tonnes of leafy vegetables per year with a gross income of RM50mil, excluding fruits and palm oil.

They usually send most of the produce to Melaka, parts of Johor, Kuala Lumpur and Kuantan while the remaining 10% would be exported to Singapore.

“About 80% of our supplies go straight to the hypermarkets while the balance will be supplied to the wholesale markets,” he added.

At another event, Muhyiddin said the government’s efforts to fix Felda was important to restore the rights of its more than two million settlers.

He said when Perikatan Nasional took over the nation’s administration, one of the objectives was to fix and rehabilitate Felda.

“This is not a small issue, which is why the government must take steps to save and return the rights back to the settlers.

“If the land belongs to them, we will give it back to them. If previously the company is public-listed, we will return it as a private company,” he said in his speech during a meeting with local community leaders at Felda Sri Jaya here.

In October, Felda issued RM9.9bil sukuk and took back 351,000ha it leased to FGV Holdings Bhd under its new recovery plan.