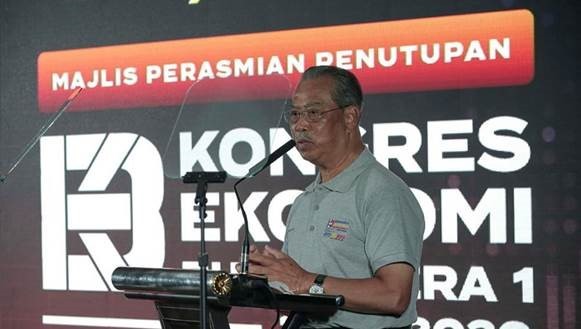 KUALA LUMPUR: Tan Sri Muhyiddin Yassin has urged members of the Bumiputera community who have benefited from the New Economic Policy (NEP) to "pay it forward", creating a caring Bumiputera society ecosystem.

The prime minister said this was to ensure the continuity of the Bumiputera in the long run, adding that the community must practise a spirit of togetherness for the sake of future generations.

"I believe it is time for NEP beneficiaries to give back to society and future generations.

"For instance, the business sector is a great avenue for previous generations to help provide a foundation for those who need help, through mentor capital or network capital," he said at the closing of the Bumiputera Economic Congress (KEB), here, today.

Muhyiddin said although the Bumiputera had achieved many feats, the community still has a lot to improve on, especially on their economic standing.

He pointed out that the Bumiputera community are still the country's poorest, with a high absolute poverty incidence of 7.2 per cent in 2019 compared to the Chinese (1.4 per cent) and Indians (4.8 per cent).

"These two indicators show that the Bumiputera community is still behind other races despite the various efforts through the Malaysia Plans since the start of the NEP.

"Whether we want to or not, the Bumiputera must move in line with the world's economic developments, including to design and create a more positive, competitive Bumiputera ecosystem in the era of fast-growing technology," said Muhyiddin.

The government, he added, continues to provide assistance and opportunities for the Bumiputera community through financial loans from SME Bank, National Entrepreneur Group Economic Fund (Tekun Nasional), Amanah Ikhtiar Malaysia and others.

He said Majlis Amanah Raya (Mara) had spent RM28 billion since 1966 to empower Bumiputera human capital through the sponsorship of over 1.03 million students to Mara Junior Science Colleges, technical and vocational training and education institutions, and other local and international tertiary institutions.

"The efforts to build the Bumiputera agenda is being continued under the aspirations of the Shared Prosperity Vision 2030 to tackle inequality, structuring the economy, and building Malaysia to face a more challenging era in the next 10 years."

Muhyiddin said he also welcomed efforts by the Malay Consultative Council (MPM) and other non-governmental organisations (NGOs) to help the Bumiputera community.

These positive efforts, he added, proved that the Bumiputera are a resilient community.

"I hope that you continue this, working together with the government to develop the Bumiputera in all social, economic and educational aspects."

The prime minister also said he had agreed for Bumiputera-related affairs to be managed by the Prime Minister's Department.

He said the government would form a joint committee with the MPM, led by Minister in the Prime Minister's Department (Economy) Datuk Seri Mustapa Mohamed.

"We have seen the MPM resolutions being passed, and the acceptance of the 1965-2020 Bumiputera Economic Congress (KEB).

"I have also agreed to one item in the resolution, which is to place Bumiputera affairs under the Prime Minister's Department," he added.

The 13-point resolution, among others, includes implementing institutional reform, empowering the Orang Asli, and making Mara and the Malaysian Islamic Economic Development Foundation as leading agencies for the Bumiputera community.