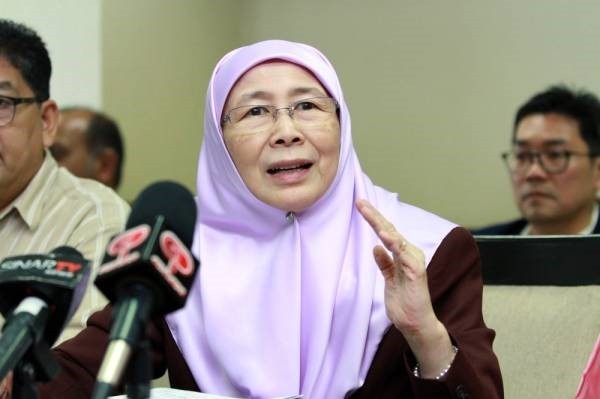 PUTRAJAYA: Women participation in the labour market was at a mere 55.2 per cent last year, compared to men who made up 80.4 per cent of the workforce.

Deputy Prime Minister Datuk Seri Dr Wan Azizah Ismail said many women despite being talented opted not to work because of responsibilities to their family and home.

"To become a developed and high income nation, the female workforce must be further strengthened and enforced.

"Many studies which were conducted showed the economic gap between males and females had been increasing of late.

"The World Bank also revealed that per capita income can be increased to 23.7 per cent in the short term and 26.2 per cent in the long term if the economic gap was reduced.

"This can be done by encouraging more women to join the workforce," Dr Wan Azizah who is also the Women, Family and Community Development Minister said in her speech at the 2019 National Women and Family Convention, here, today.

Her speech was read by her deputy Hannah Yeoh.

She said in Malaysia, many women have sacrificed opportunities to work because of responsibilities, while some have to work informally due to economic demands of their families.

"This scenario will expose them to many risks in terms of security, well-being and uncertain income," she added.

Dr Wan Azizah said the 2020 Budget announcement last week also revealed many "goodies" for women to encourage them to go back to work and contribute to the country's economy.

Among the incentives announced are the Skim Jaminan Pinjaman Perniagaan (SJPP) which will be enhanced to better facilitate access to financing for small and medium enterprises (SME) and the Women@Work incentives to encourage and enable women to return to work.

Apart from that, income tax exemptions for women returning to work will be extended for another four years through 2023 and a review of the Employment Act 1955 will be done, to increase maternity leave from 60 days to 90 days effective 2021.

Meanwhile, Yeoh, in a press conference said there is a certain stigma that women would want to have more children just to enjoy the 90-day maternity leave, which is not true.

She said the 90-day leave will ensure mothers could have exclusive time with their children to breastfeed and care for them as the first three months of a baby's life is crucial and must be cared by the mother.

"This will also reduce accidental incidents of babies choking on milk and negligence and abuse by secondary caregivers.

"So it is not right to say that the 90-day maternity leave will allow women to have more children," she added.

Yeoh also said the ministry will conduct a multi-stakeholder meeting to address violence against women, not only at the national level but also at state and district levels.

"This meeting will be carried out periodically involving state women excos, assemblymen and the police on violent situations in the area and whether the numbers tally with the actual cases in the area.

"Because we know that some women do not come out to report if they are being abused. This meeting will also help to reach out to those who need help," she added.