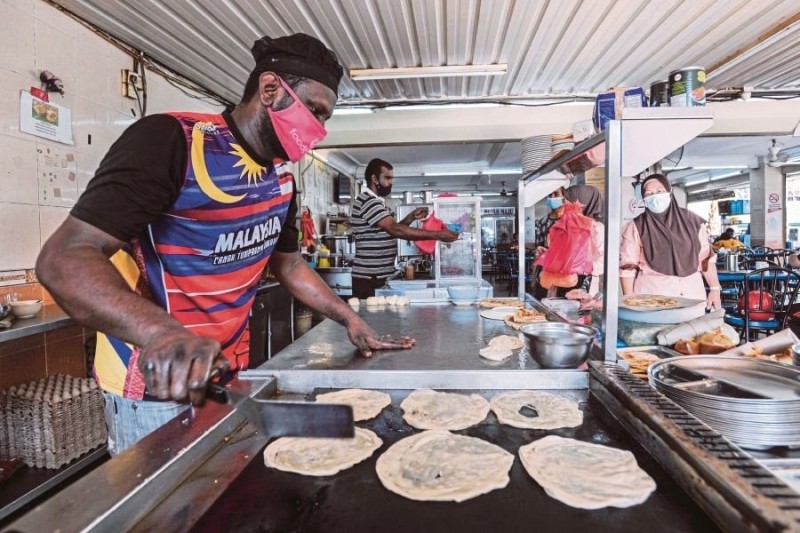 ROTI canai, Malaysians' favourite go-to breakfast meal, is expected to cost more due to the increasing price of wheat flour.

Operators of mamak restaurants here said they were already feeling the pinch of sourcing goods at a higher price, forcing them to increase some of the prices of food sold at their eateries.

Hameediyah Restaurant director Muhammad Riyaaz Syed Ibrahim said the restaurant had already increased the prices of some foods as the prices of other materials used in cooking had gone up for several months.

"For instance, a five-litre bottle of cooking oil which used to cost RM27 is now being sold to us by suppliers at RM44.

"So we have increased the price of some items. For example, our most sought after dish — murtabak — has gone up by RM1.

"If the price of flour goes up, then we have no choice but to increase the prices of the items again.

"We have never increased the prices for the past two years," he said when contacted yesterday.

At mamak restaurants in the northern region, plain roti canai was currently being sold from RM1.20, he said.

He added that aside from the rising cost of wheat flour, the increase in minimum wage and operational costs, such as rentals, had also forced restaurant operators to revise prices.

"Roti canai is always sold below cost at all times, so it cannot be subsidised any more if the price of wheat flour goes up.

"Food prices will definitely go up in tandem. We cannot pretend that it is not going to happen," he added.

Several news reports showed there was already a hike in the price of wheat flour, as well as a supply shortage at retail outlets.

The hike in the price of wheat flour was attributed to the Russia-Ukraine war and India banning the export of wheat.

"Raw materials play an important role in the business sector.

"However, things can get challenging if shortages and increasing prices are not handled well."

He said wheat flour was an essential ingredient in foods that Malaysians routinely eat such as roti canai or kuih, and a hike in the price would likely be passed on to the consumers.

"I've been told that supplies of wheat flour are dwindling in some supermarkets.

"In this case, there is the possibility of cartels storing supplies and selling them at a higher price.

"I hope the Domestic Trade and Consumer Affairs Ministry will monitor this and take appropriate action.

"They (food sellers) are used to facing hardships and obstacles. Whatever happens, they must carry on. But consumers will be affected if food prices are increasing.

"Of course, we would prefer cheaper options, but this can be detrimental to sellers."

"We try not to increase the prices of foods we sell.

"The profit margin may be smaller, but we can still manage by absorbing the costs.

"At the moment since our wheat flour is coming from Australia, we are not as impacted by India's decision to ban exports of wheat.

"The more serious problem now is the shortage of chicken."

He said if prices kept rising, the government might have to introduce subsidies for the ingredient in an effort to control food prices.

He added that the ministry had been responsive to the issues of business operators and were working together to address the problem. Additional reporting by Luqman Hakim