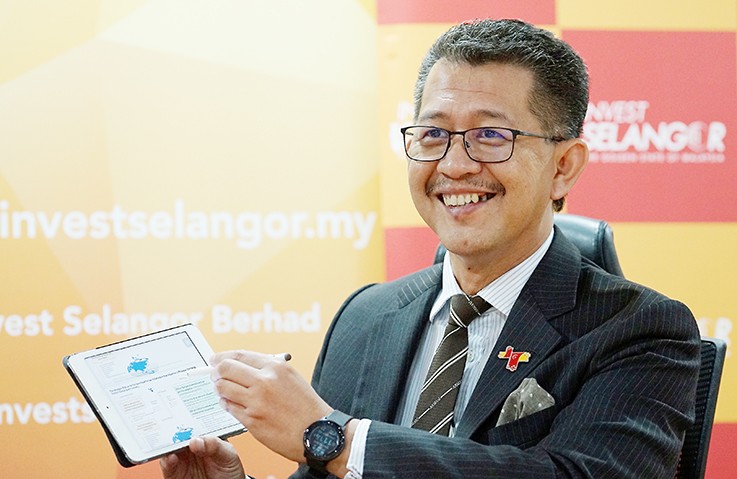 For the past five years, Selangor has created more than 80,000 job opportunities from the manufacturing sector.

It is a pivotal segment for the richest and busiest state in Malaysia. Selangor is home to some six million people, of which half are in the job market.

While taking this as an exceptional milestone for the state, Hasan Azhari said there is more that can be done by the state promotional agency, particularly to ramp up on the IR4.0.

He said with the automation of traditional manufacturing and industrial practices, by using modern smart technology, will ensure that the state keeps up with the regional market, particularly in the manufacturing sector.

“In 2015, Selangor paved the way to be acknowledged as a smart state by enhancing the use of technology as the key enabler for economic and socio activities.

“That is why we are targeting more on the high-tech and knowledge-based industries which require companies to embrace IR4.0.

“As such, we are also preparing on talent pools towards such features,” Hasan Azhari told The Malaysian Reserve in an interview recently.

Selangor reported its highest direct investment in 2018, with RM18.9 billion of investment recorded, a 238% surge from RM5.59 billion recorded in the preceding year.

One exciting cluster is transported equipment, which comprises aerospace supply chains from manufacturing to services, located at the state’s three aerospace parks — Serendah, Subang and Sepang.

Hasan Azahari said the five clusters will remain as the anchor investment for Selangor, which aims to rack RM12 billion of investment this year despite the economic downturn due to the coronavirus impact.

“Selangor is seen as an excellent network because it is an entry point to the country, either through the ports or airports located here.

“Additionally, the talent ability or talent pool produced by institutions in Selangor is abundant compared to the other areas which can definitely support the ecosystem,” Hasan Azahari said.

He added that the agency has been provided hand-holding services to these investors, making sure that their project implementation takes off smoothly.

“Coordination meetings are held monthly to facilitate and track the progress, ensuring those projects meet their schedules and are on track.

“These are the factors why they choose to invest in Selangor,” Hasan Azhari said.

As small and medium enterprises (SMEs) contribute to more than 98.5% of the economic activities, Hasan Azhari said Invest Selangor will continue to be innovative in assisting entrepreneurs to develop their businesses during the tough period.

“As an example, in May, during the Ramadhan period, we launched the E-Bazar Raya to help SMEs market their products on Shopee when the Movement Control Order was first introduced.

“We only targeted 5,000 SMEs to get on board the Shopee platform with a RM8 million sales target.

“However, the response was overwhelming with 8,400 entrepreneurs joining this initiative, bringing direct revenue of RM11.7 million,” Hasan Azhari said.

Overall, he said the campaign generated over RM300 million in a ripple effect to the merchants.

These include economic, socio-economic and branding effects that have created positive impacts towards the merchants, including their offline operations, job creation, online customer traffic, publicity, social media hype and more.

The Selangor E-Bazar Raya Campaign was an exclusive collaboration between the Selangor government and Shopee, which lasted two months from May 4 to July 4, with the state government channelling RM1 million in the form of voucher benefits to Selangor merchants on this platform.

“We envision to be the trendsetter for other promotional agencies in the country.

“It is important for us to continuously engage various parties and launch various initiatives, so SMEs can flourish in the state,” Hasan Azhari said.

According to the SME Corp Malaysia’s statistics, Selangor remains the leading state with 19.8% of the total 907,065 SMEs in Malaysia residing in Selangor, followed by Kuala Lumpur with 14.7%.

Hasan Azhari believed that the growth of small start-ups will play a major role in the state’s economic sustainability.

As it is, Invest Selangor has also yet to revise its 2020 investment target, although the Covid-19 crisis has not fully recovered.

“Even though the scenario is still highly uncertain, with the rate of global foreign direct investment to drop to around 40% due to this pandemic, Selangor is still optimistic to reach the RM12 billion target of approved investment this year.

“Looking at the current trend which includes our virtual engagements with companies around the world, we can still be optimistic and on the right track to achieve this target,” he said.

However, he said the situation will highly depend on how fast the project can be materialised.

“Some of them are already in the pipeline and waiting for the federal government’s approval.

“Therefore, at the moment, we have not reduced the target yet, as the aim is also lower than what we have achieved last year,” Hasan Azhari said.

“It could be approved according to the timeline. But if it is not, then maybe, we will record a slightly lower than the RM12 billion investment target.”