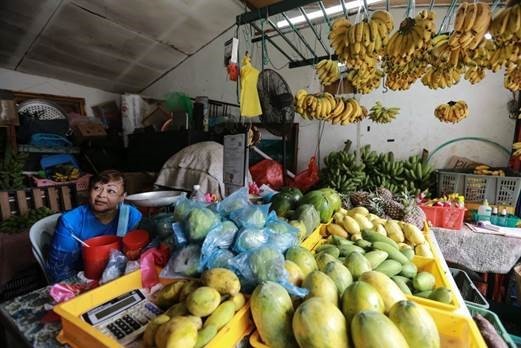 KUALA LUMPUR, Oct 15 — As the conditional movement control order (CMCO) came into force in Klang Valley yesterday, some small business owners expressed concern of making ends meet in the coming weeks as people are being told to stay at home.

While most businesses are thankful that they could remain open throughout the CMCO period, many street-side hawkers and eateries, which depend heavily on constant foot traffic to their store, fear if they will be able to break even.

Fresh fruit stall operator, Norlaila Yatim, 52, who operates her stall in Pantai Dalam said she is thankful that she can still do business during the CMCO but predicts there will be a drop in sales.

Norlaila’s fruit stall are among various street vendors in Pantai Dalam, a compact neighbourhood on the fringe of the city centre, who depend on foot traffic to carry over sales apart from their regulars.

“It's inevitable that people like me will see a drop in sales in the coming weeks but whether we could still make enough to break even, it is too early to say at the moment.

“But I'm thankful I still can open my stores and sell my inventory. What is important right now is that I can still move my product from the shelf and I have enough funds to roll over to the next month,’’ she said, adding that she hopes that the Covid-19 situation in the country will improve.

Norlaila said she usually makes around RM500 a day prior to MCO, and started earning about the same during the recovery phase of the MCO.

She also recalled that incurring losses in the thousands of ringgit during the start of the movement control order in March as she was unable to sell her fruits.

“I remember purchasing 150kg of pisang tanduk a few days before MCO and seeing them slowly turn bad as I could barely sell any during the lockdown,” she said, referring to a type of banana usually fried as fritters or chips.

Another street hawker in Pantai Dalam, Noraimi Sani, 38, who sells street burgers colloquially called burger Ramly, said the CMCO would definitely affect his revenue as he is only allowed to operate until 10pm.

Noraimi said he usually starts business from 6pm to 12am, catering to mostly blue-collar workers who frequent his stall for a snack or supper after finishing work late at night.

“It is good that they still allow us to operate but I am one of those stalls who earn their profit during late hours.

“I have tried operating my stall earlier in the day but there were barely any customers. Believe it or not most of my customers will come to my stall after 10pm, usually after they are done with work. This is the usual period where I make my money,” he said.

On a good night, Noraimi explained that he could sell over 100 burger patties, but he expects this to drop drastically in the coming weeks. A simple burger with one patty starts at around RM3 each.

“I am also a bit confused on whether I could still cook for delivery after 10pm. I know food deliveries can extend until midnight but I am not sure whether the authorities would allow me to cook at my stall until then,’’ he said, adding that clearer standard operating procedures should be issued by the authorities.

The eateries along the aforementioned road are a favourite location for cheap eats among workers of nearby commercial centres in adjacent neighbourhoods.

Taking advantage of the foot traffic in the area, 25-year-old Fakrul has been selling face masks, hand sanitisers and latex gloves from the boot of his vehicle since August to make ends meet.

“I lost my job during MCO and was looking at ways to earn a stable income. My father suggested we should sell such items to make ends meet.

“Since they lifted the MCO, we have been selling these items according to market price. On a good day, people would buy boxes and boxes of three-ply masks and I could get a sale reaching RM160 daily,’’ he said.

Fakrul is optimistic that he could still break even during this CMCO period.

“CMCO had to be done but it is too early for me to say that I would be drastically affected in terms of sales but I am contented that I can still be out here to run my business,’’ he said.

Imran Ilham, 39 who operates the Ladangku Chicken Factory outlet in Sg Penchala said he saw a spike of poultry sales at his Sungai Penchala retail outlet a day before the commencement of the CMCO.

“There was a bit of panic buying [on October 13] and even higher than usual sales in the morning. We sold about 300 whole chickens yesterday as compared to 150 on any other day.

“People would need a bit of time to get used to the new SOP but I think they would realise that they can shop as usual. In terms of sales, there isn’t any drastic change apart from the panic buying yesterday and I suspect the buying trend would continue to be normal from here on,’’ he said when met at his Ladangku Chicken Factory outlet in Sungai Penchala.